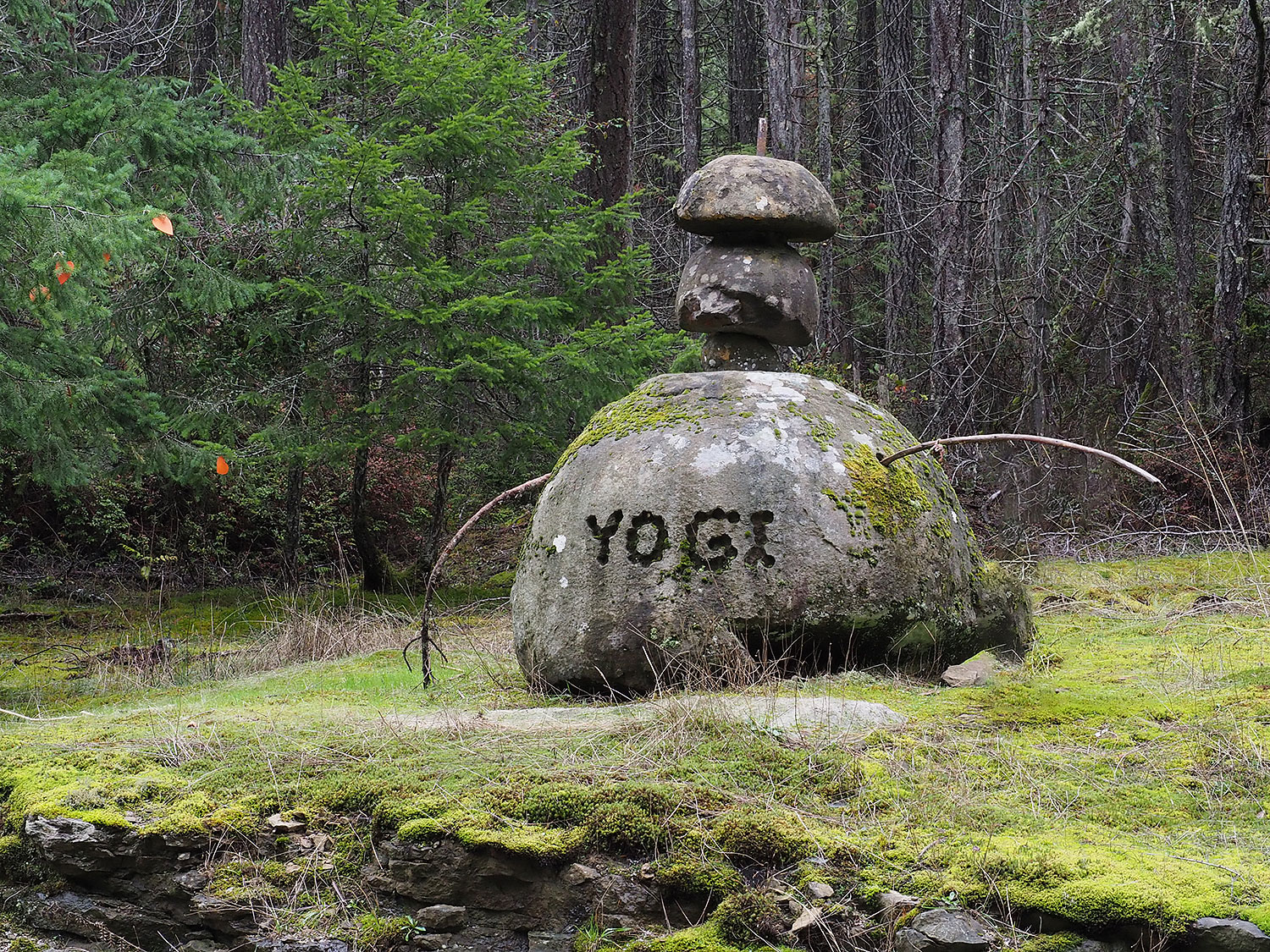 The RDN purchased lands now known as Cox Community Park in 2002 on behalf of the residents of Electoral Area B (Gabriola, Mudge and De Courcy Islands).

This acquisition was made possible by a successful Area B referendum in November 2001 that allowed the RDN to borrow $500,000 to buy the land from the Community Credit Union. At the same time, the RDN spent $500,000 in regional park funds to buy what is now Descanso Bay Regional Park from the Credit Union on behalf of the residents of the entire Region.

All photos on this page are by Judy Preston 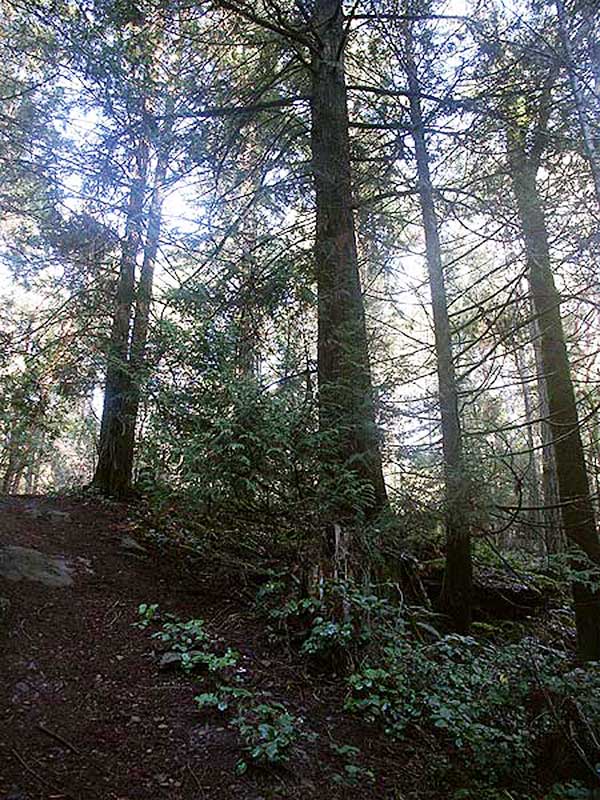 In February 2003, RDN Director Gail Lund organized a walkabout in the new community park with RDN Parks Coordinator Joan Michel. Several interested members of the community joined them in an exploration of the existing trails and an initial inventory of park boundaries and features. This was the beginning of a process to determine what would be required to develop the parkland appropriately and meet user needs. With the inauguration of the Electoral Area B Parks and Open Space Advisory Committee (POSAC) in June 2003, community involvement in the development of Cox Community Park was formalized.

Early on, the landowner fronting the northeastern boundary of Cox alerted the RDN to the unauthorized trail connecting the Park with the end of Sarah Place via private land. The RDN moved quickly to address the trespassing issue and ensure that a public entrance was developed at the legal access to the Park on the east side, River Place. Over the course of the summer and early fall, volunteers led by POSAC members Ron Holmes, Randy Young and Doug McLaughlan worked with the RDN on identifying and brushing out a new 400-metre section of trail to connect the new park entrance at River Place with the existing main park trail leading to Taylor Bay Road.

To complete the new trail link with River Place, it was necessary to cross a broad shallow wetland just inside the eastern boundary of Cox Community Park. Ron Holmes and Joan Michel explored a number of possible crossing locations and settled on one directly below River Place.

The plan was to install two or three large culverts and create a causeway suitable for equestrians, cyclists and pedestrians. The RDN convened an on-site meeting with Ministry of Water, Land and Air Protection staff and community environmentalists to review the plan. The Ministry and community representatives were clearly against the installation of culverts because they would cause too great a change to the wetland. A boardwalk with footings within the wetland was deemed acceptable in the absence of any fish in the watercourse and sufficient funds to consider a clear span structure. 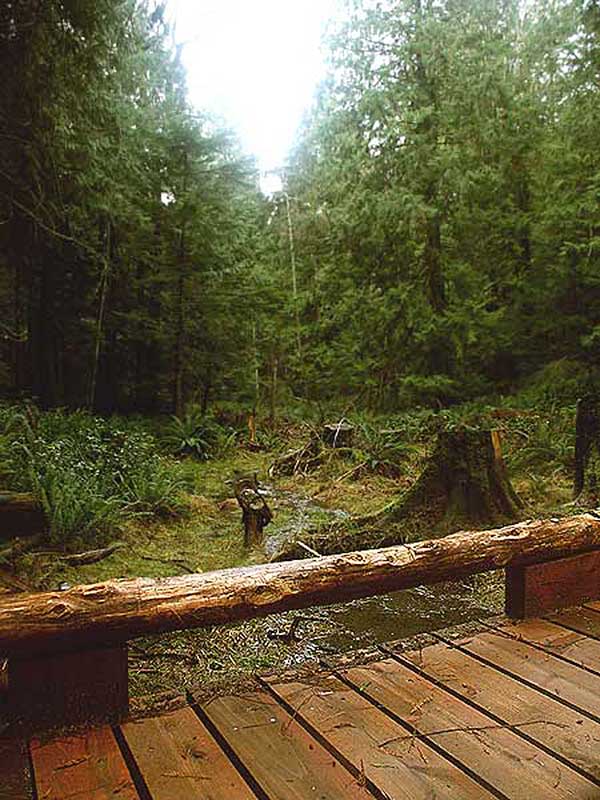 The RDN commissioned an engineered design for a 75-foot boardwalk strong and wide enough to carry traffic consisting of horse, bike and people and based on whole cedar log stringers found on site. A cluster of eight large cedars had blown down in the wetland adjacent to the proposed boardwalk site and Ron Holmes, Randy Young and Don McLaughlin recognized the value of this found wood for boardwalk construction. Six 25-foot whole logs were prepared for the boardwalk stringers and the rest was milled for decking. Randy Young made use of his engineering skills and software to calculate available wood; he also organized the stripping and treating of the cedar stringers. Fall rains arrived and building was put off to the next spring when the watercourse would be drier and easier to work with. Over the winter, the RDN and volunteers identified and removed hazard trees along the new 400-metre trail connection to River Place and finished trail clearing. This was the first new trail to be completed in Cox Community Park.

Late in the summer of 2004 the wetland by River Place dried out enough to proceed with the installation of simple sona-tube footings and construction of the boardwalk. Progress was stalled early when a first excavation into the wetland revealed more than 17 feet of wet clay and sand with no solid material suitable for footings in sight. The engineer was called back to evaluate the situation and provide new plans. A number of alternate footing mechanisms were explored, including gabions and floating foundations. The early arrival of wet fall weather re-invigorated the wetland stream and once again the project was terminated until the following year.

By the fall of 2004, significant progress was taking place on other fronts that would greatly assist with the development of Island trails. Several members of the POSAC committee recognized the need for a community-based organization to compliment the advisory role of the POSAC. The Gabriola Land and Trails Trust (GaLTT) was formed in the fall of 2004. Kerry Marcus was elected the first president, and Colin Masson vice-president. The formation of GaLTT provided a means to better facilitate volunteer trail work and fund raising efforts necessary if the goal of an island trail system is to become a reality. 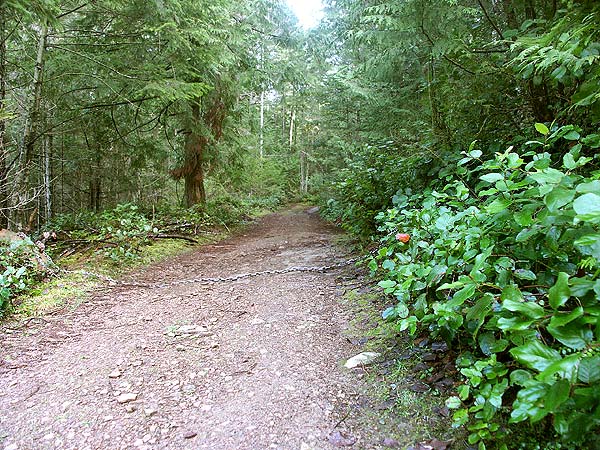 Keeping Cox Community Park trail projects on the move, GaLTT began working with the RDN on a new trail parallel to Taylor Bay Road and joining the two west-side entrances to Cox. In consultation with the Ministry of Transportation, plans were made for a safe crossing of Taylor Bay Road in order to connect with Descanso Bay Park. A safe vehicular entry point for the proposed Cox parking area near McConvey Road was also identified.

The new trail parallel to Taylor Bay Road, 400 metres in length, would be GaLTT’s inaugural trail project. It was named the Yogi Trail because of its proximity to the landmark rock figure erected by the Youth Organization of Gabriola Island (YOGI) in the 1960s along Taylor Bay Road at McConvey in what is now Cox Community Park.

GaLTT trail leaders Paula Maddison and Em Gavin coordinated GaLTT work on the Yogi trail project. With RDN supervision and trail building training by Parks Assistant Jake Belobaba, GaLTT and its many dedicated community volunteers worked through the winter of 2004-05 to build a great trail. Cox Community Park and the new YOGI Trail were officially opened in April 2005 as part of a larger GaLTT Earth Day event that celebrated parks and trails all over Gabriola. 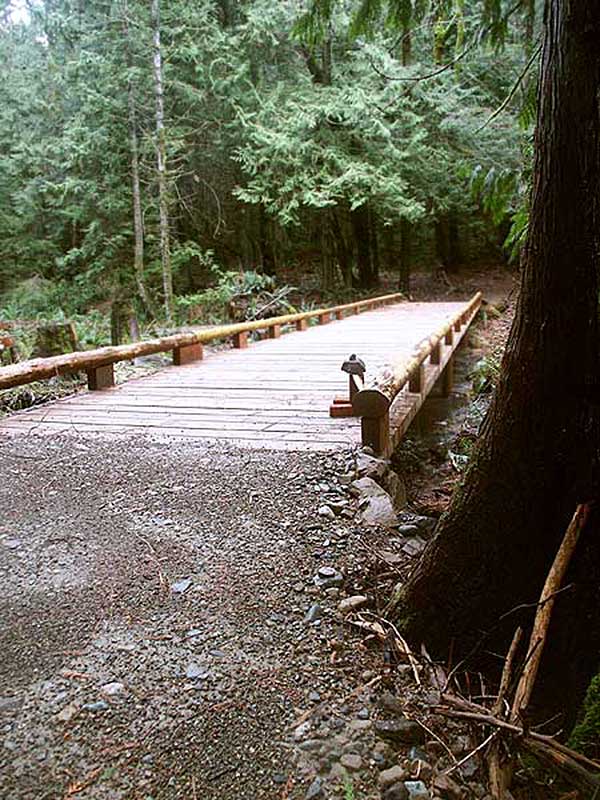 In August 2005, RDN contractors began installing pilings for the River Place boardwalk. To everyone’s astonishment some of the pipes went down 30 feet before hitting solid ground. The pipes were cut to height, a steel frame welded on, and the cedar stringers (structural logs) anchored in place. Jake Belobaba organized community volunteers to help attach the 10-foot decking planks to complete the bridge. By the end of October, stone and gravel approaches at either end of the bridge were installed and GaLTT trail volunteers completed the trail up the rocky slope to River Place. Final work on the River Place Trail and boardwalk connection involved completion of the trail-road interface at the end of River Place and the installation of park signage. The end result is a sturdy span that should last for decades, accommodate all trail users safely, and have minimal impact on the surrounding wetland.

The River Place boardwalk and trail connection at Cox Community Park provide the link between the Park’s eastern gateway at River Place and the Park’s main trail network originating at Taylor Bay Road.

A large group of community volunteers pitched in to help the RDN install the boardwalk decking, approaches and trail up to River Place. The installation of the boardwalk marked an important milestone in the history and development of both Cox Community Park and island trails.

GaLTT assisted with the funding of trail work in Cox Community Park through use of a Shell Environment Fund grant of $5000 specifically to clean up hazards and provide safe and environmentally sustainable access to the park. The SEF grant funded machine time to rough out approaches to the boardwalk and other trail sections, gravel for surfacing, and some interpretative signage.

The Gabriola Horse Group also made a $100 contribution toward the construction of the boardwalk, which allows horses to safely access the park.

The River Place trail connector in Cox Park opens up some great new routes for Islanders. The boardwalk off River Place is also an important metaphor—a crossing that connects the island in new ways. The boardwalk highlights the efforts that have been made to date on developing parks and trails on Gabriola and signals a bright future for Island trails. One day, it is hoped that these trails will connect with a broader community trail system that will link all Island neighbourhoods and provide the community with some fine ways for non-motorized users to get around.