Some of the most eye-catching features are those caused by the erosion of sandstone by water and weather, and those are the things that people notice first and find memorable about our island, but if you dig deeper (sorry) there are a lot more fascinating facts to learn. See the gallery at the bottom of the page for more examples of sandstone formations.

Gabriola and its neighbouring islands are made up of sedimentary rock— sandstone, mudrock or shale as it is usually called, with some conglomerate.

Bedrock geology of Gabriola and its surroundings 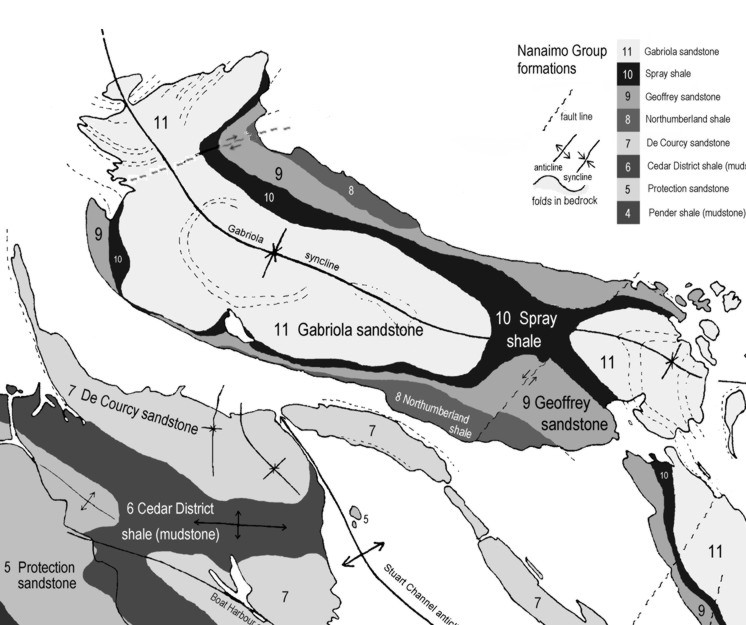 Differential erosion has exposed formations of different ages. The formations tend to alternate between sandstone and shale with Gabriola sandstone (11) being the youngest formation and at the top. Differential erosion—soft shale, relatively hard sandstone and conglomerate—has resulted in precipitous cliffs, points, islands, and well-protected bays. The subdued relief of eastern Vancouver Island is due to the softness of all the Nanaimo Group formations in comparison with the older, mostly crystalline rocks that make up the rest of Vancouver Island.

Formation of the Nanaimo Basin

The Nanaimo Basin was first formed about 90 million years ago when Vancouver Island travelling northeast from the Pacific Ocean collided with the North American continent travelling west. This collision arose because of sea floor spreading and the subduction of the oceanic tectonic plate beneath the continental tectonic plate. Most of Vancouver Island had its origins far away across the Pacific, possibly in the region where Indonesia is now. When it first arrived, it was likely all slightly below sea level. The present-day subduction zone, once between Vancouver Island and the mainland, is now west of Vancouver Island, but the trough occupied by the Strait of Georgia persists because of the depression of the land by the weight of the mountains on the mainland and on Vancouver Island thrown up by the on-going collision.

The sediments that eventually formed the sedimentary bedrock of Gabriola are from a river or rivers (the geography is uncertain) that flowed mainly from the Coast Mountains as does the Fraser River today, though there may have been minor contributions in the oldest rocks here from the Cascade Mountains and mountains on Vancouver Island. All the rocks are marine rocks, and the different types—conglomerate, sandstone, and mudrock (shale)— reflect the distance from the mouth of the river at which the sediments were deposited. The finer the grain of the river sediment, the further it travels out to sea. The sediments have been cemented mainly by clay but very locally also by minerals like calcite, zeolite, and iron oxides.

Sedimentation in the Nanaimo Basin stopped around 65 million years ago when sea level dropped leaving high and dry what is now the Strait of Georgia and Salish Sea. The present strait was formed only during the last two million years when a series of glaciations scoured out the soft bedrock and subsequently allowed the sea to return.

Gulf Island elevations due to folding of sediments

The Gulf Islands were pushed to their present elevations as a result of folding of the by-then ancient sediments about 55 and again at 42 million years ago. This folding was occasioned by the arrival of what are now the Olympic Mountains and parts of the southern tip of Vancouver Island in a similar manner as the arrival of the bulk of Vancouver Island. This folding was accompanied by much fracturing of the bedrock. (See Gabriola’s origins.)

All of the topography of Gabriola is a result of erosion, mainly by ice during the ice ages. Modern-day erosion on Gabriola is considerably slower and caused by various kinds of chemical and physical weathering. 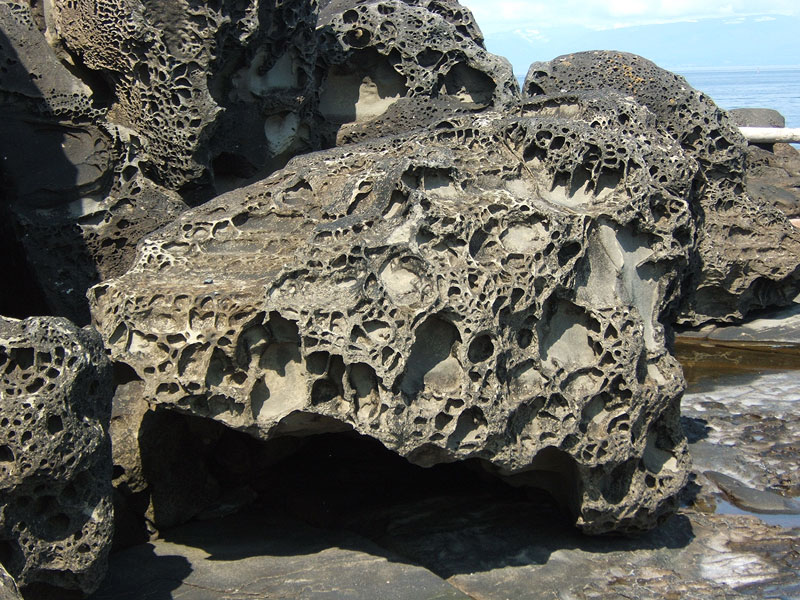 Erosion of sandstone by salt at Berry Point, Gabriola.

Erosion of sandstone by salt is common around Gabriola’s shoreline, the Malaspina Gallery being only one of several spectacular examples of this. 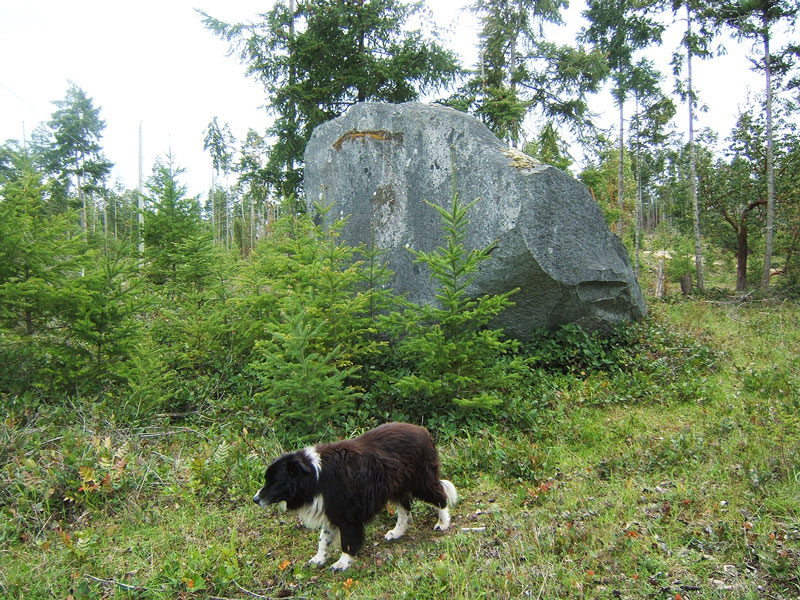 There are no igneous or metamorphic formations on the island, though you frequently see stones of these kinds of rocks—in particular basalt and granodiorite (“salt and pepper granite”)—on beaches, in the soil, and scattered in parks as erratic boulders (as in the picture at right).

These were all brought here from Vancouver Island or the Coast Mountains by glaciers during the ice ages, which only ended about 12 thousand years ago. Learm more about Gabriola’s ice-age history (PDF). 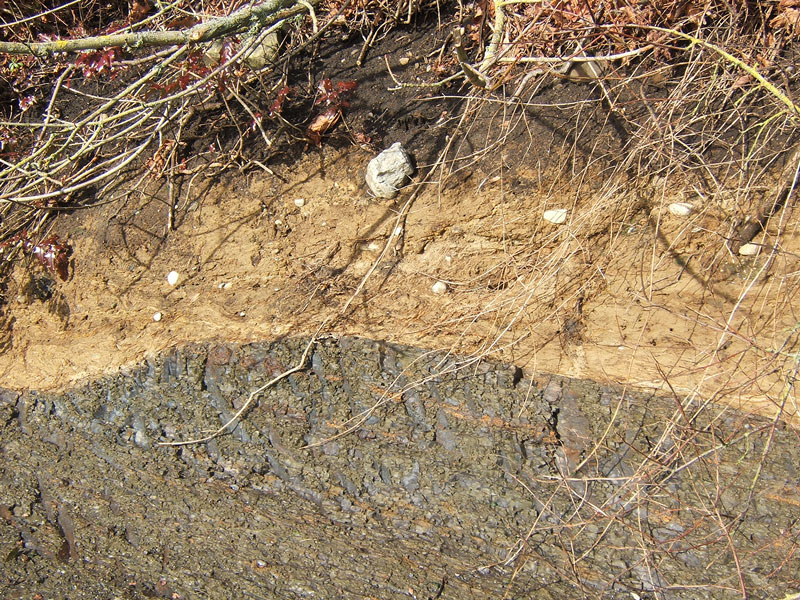 The light brown layer in this photo is glacial till that was plastered to the Northumberland Formation shale bedrock below it by the weight of a large glacier about 15 000 years ago (False Narrows, Gabriola). 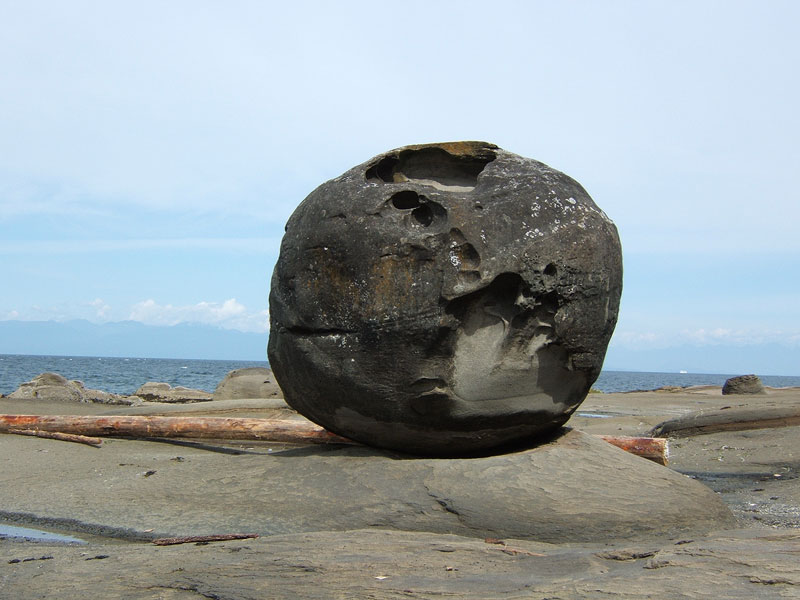 A large sandstone concretion on the beach on the Twin Beaches peninsula, Gabriola.

Gabriola is not the greatest place in the world for finding fossils—most have been severely physically or chemically weathered—but there are some, particularly inoceramids (giant clamshells) and ammonites. Shells, when not in First Nations middens, are likely from the end of the ice age when sea level was much higher than it is now. 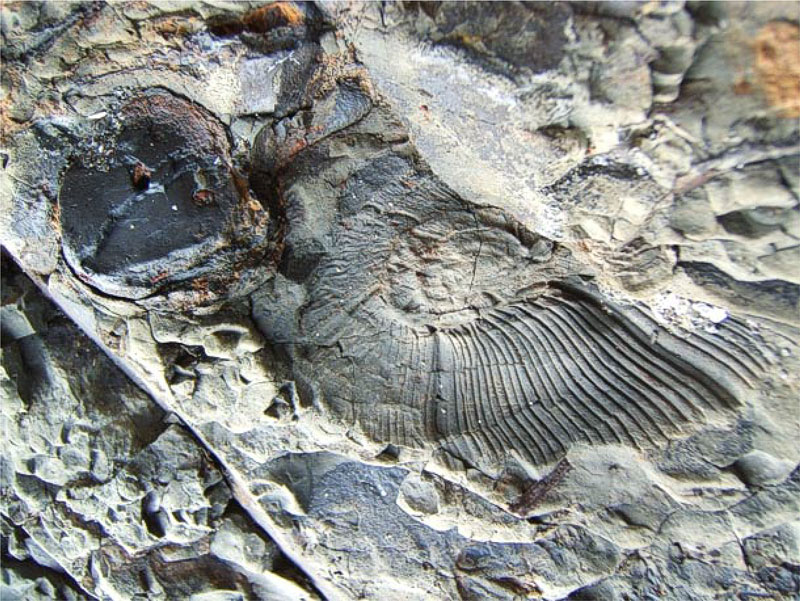 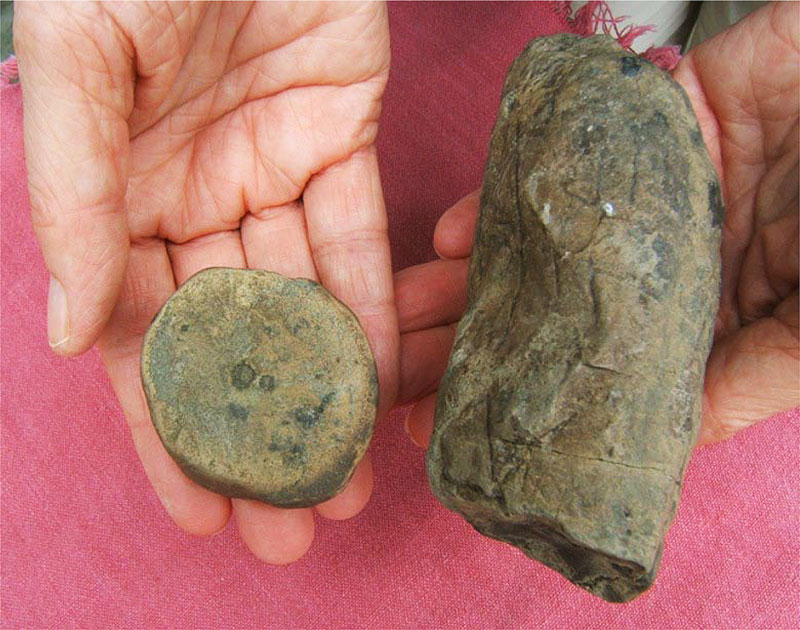 Inoceramids are a species of extinct bivalve found all over the world. If a tubelike or cylindrical section of a fossil like these has one core it is probably a siphon.

There are no active faults on the island, although GPS measurements have shown that the strain of the past is on-going, albeit at a very slow rate. (See Terra firma) Most modern faulting in the area is minor and occurs on the seabed along the outer coast of the Gulf Islands. Practically all the faults on Gabriola date back millions of years to the Eocene, and many smaller ones are now so eroded that their identification is uncertain. 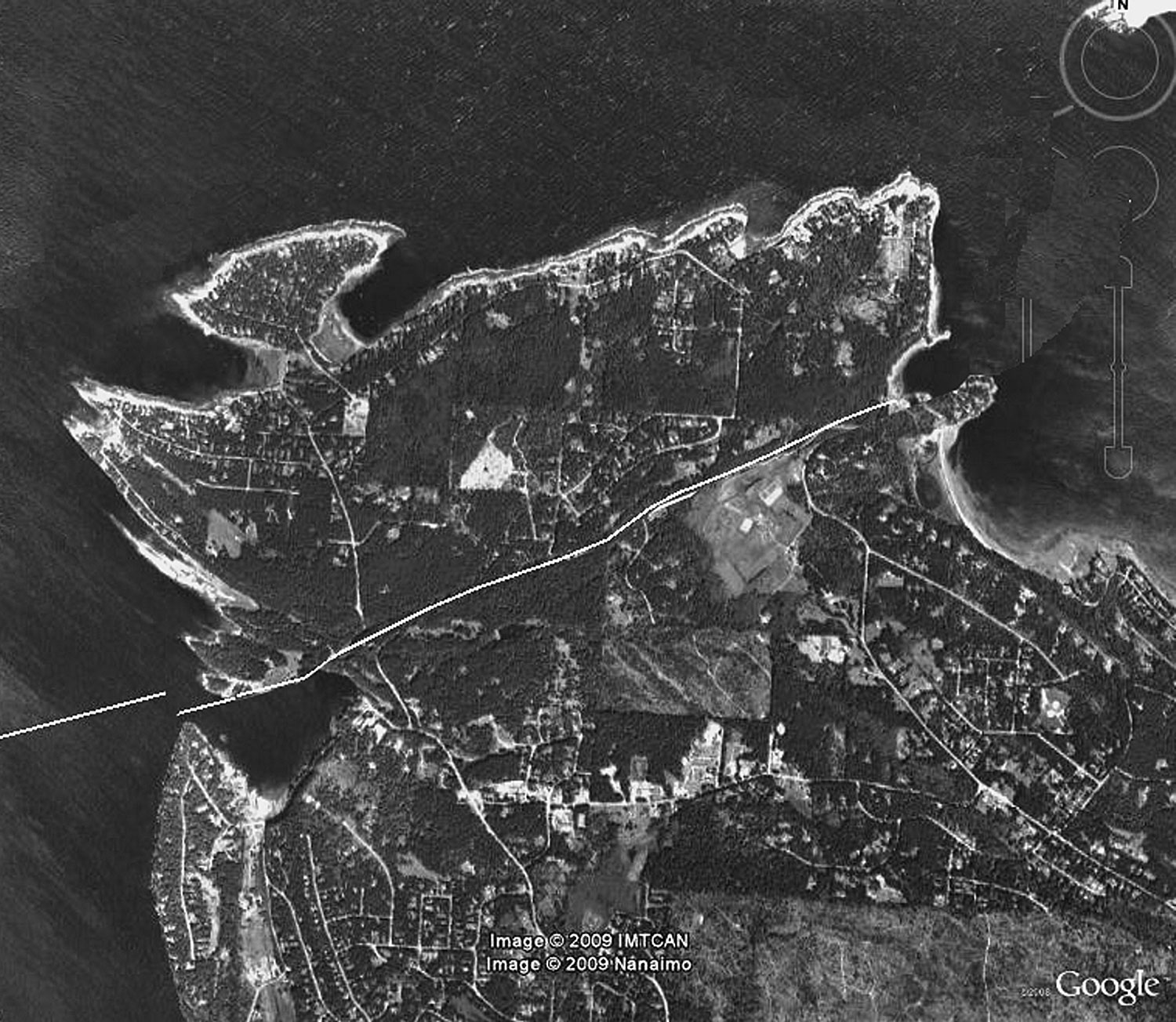 Of the two major faults on the island, the one that is most conspicuous runs from just east of the ferry terminal to Leboeuf Bay. It is responsible for the twists and ups-and-downs of Taylor Bay Road just after you leave the ferry terminal. If you were to slide the north end of the island back to where it once was (as shown at right), Descanso Bay would be almost closed, but Taylor Bay Road would be perfectly straight. (See Gabriola’s shape).

The second major fault runs northeast from near the Maples on the south shore across the island to Peterson Bay (near the old Grande Hotel, more recently Dragon’s Keep) on the north shore. The south end of the island, just like the north end, has been pushed northeast along the fault as a consequence of the pressure exerted by the Juan de Fuca tectonic plate as it subducts beneath Vancouver Island. (See Gabriola’s nose and tail).

Also, The Gabriola Historical and Museum Society has published many of his articles in their journal SHALE, archived at Nick’s site; see SHALE 7, January 2004; SHALE 9, August 2004; and SHALE 20, April 2009. 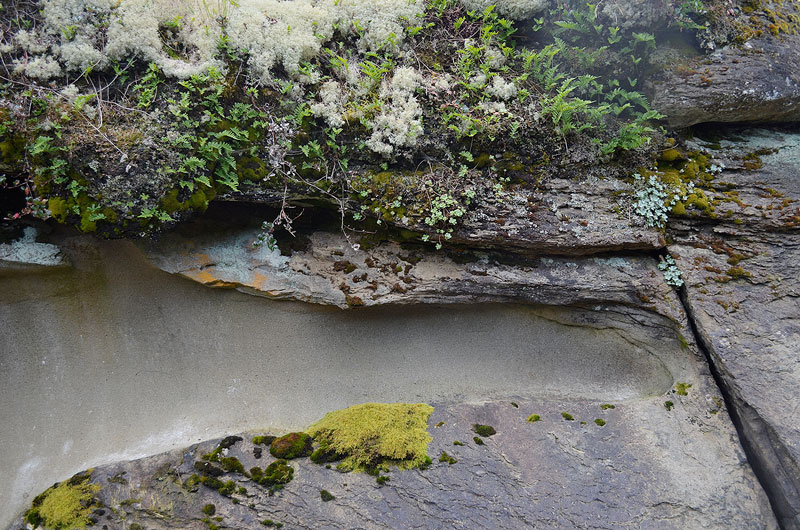 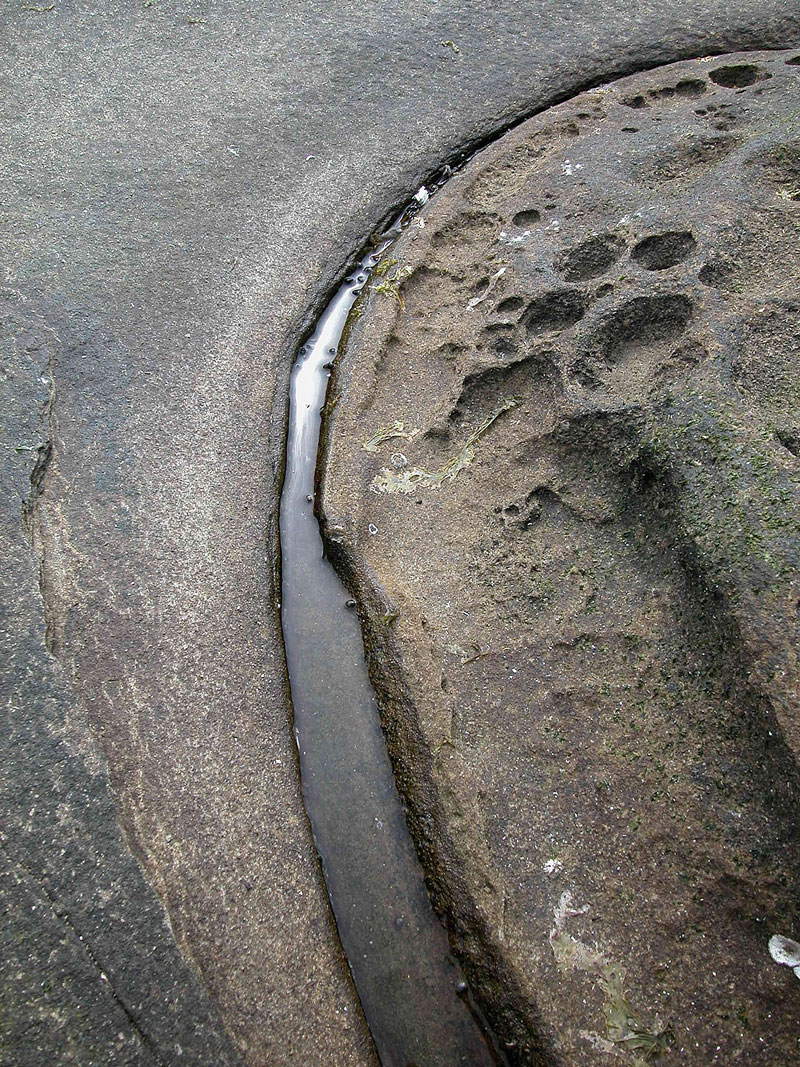 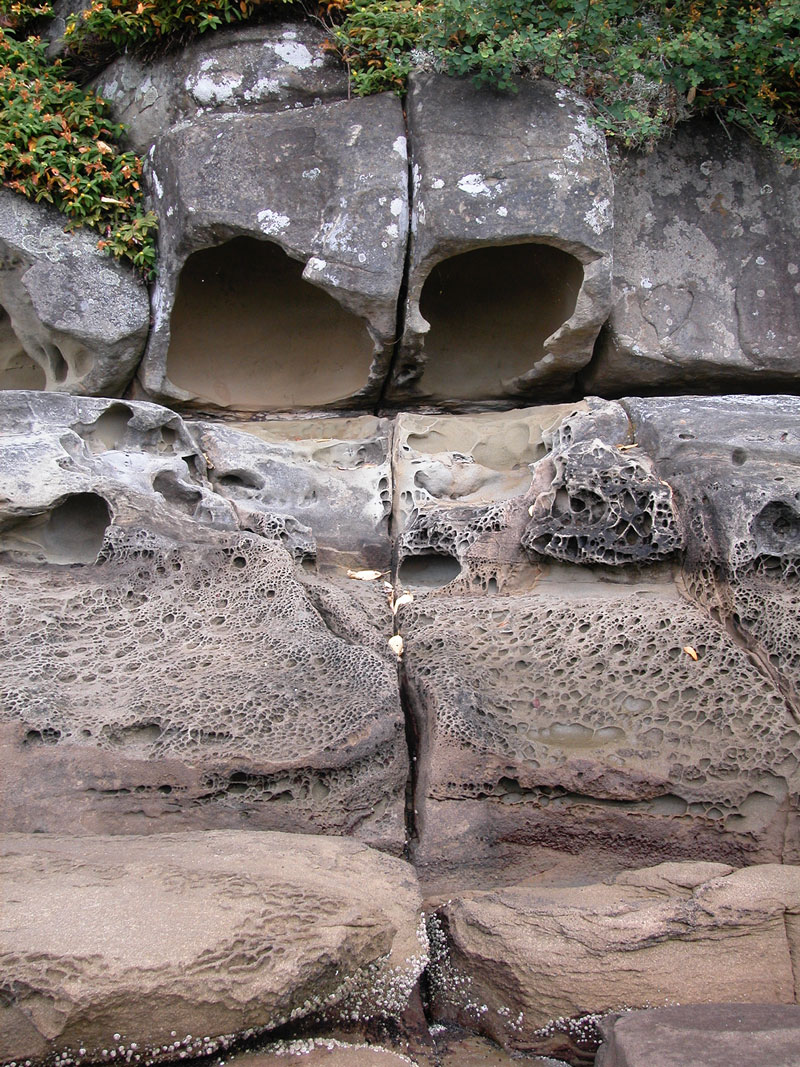 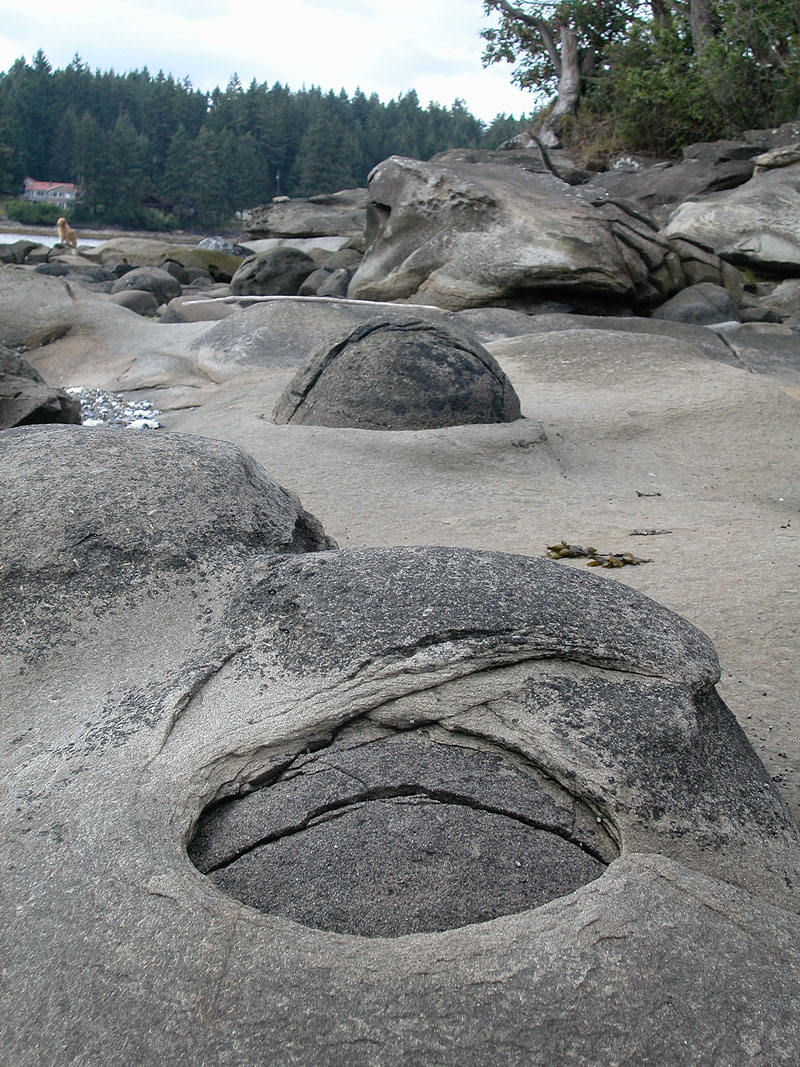 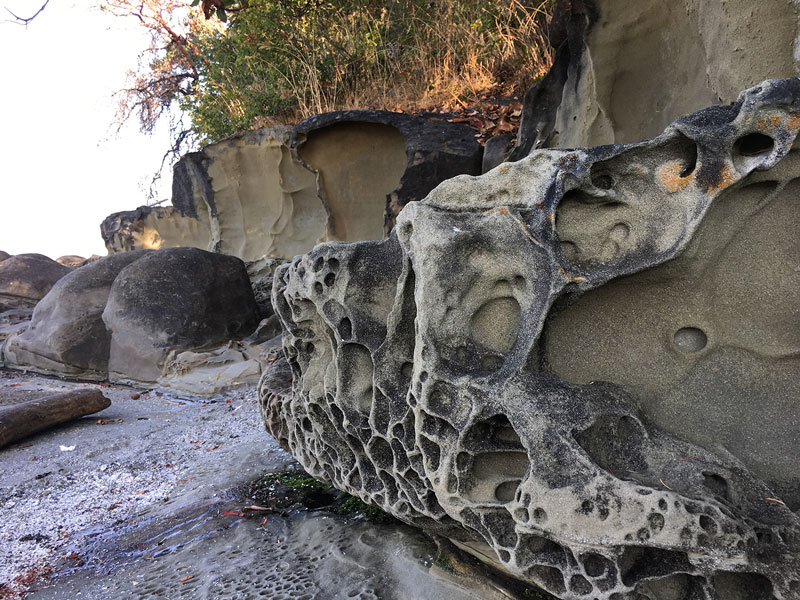 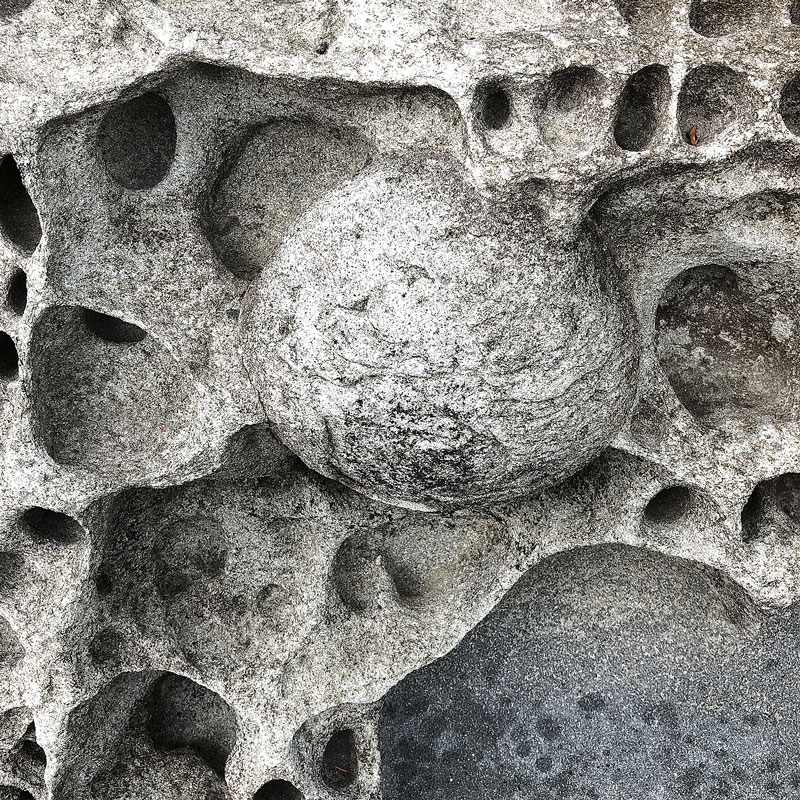 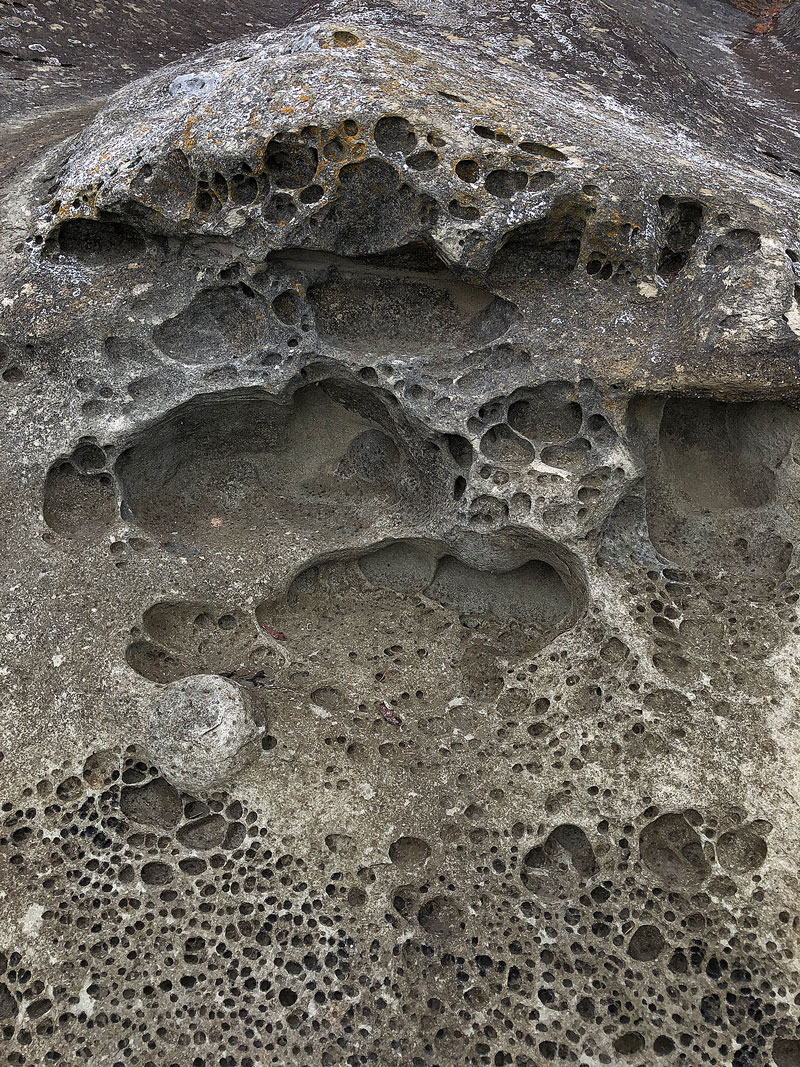 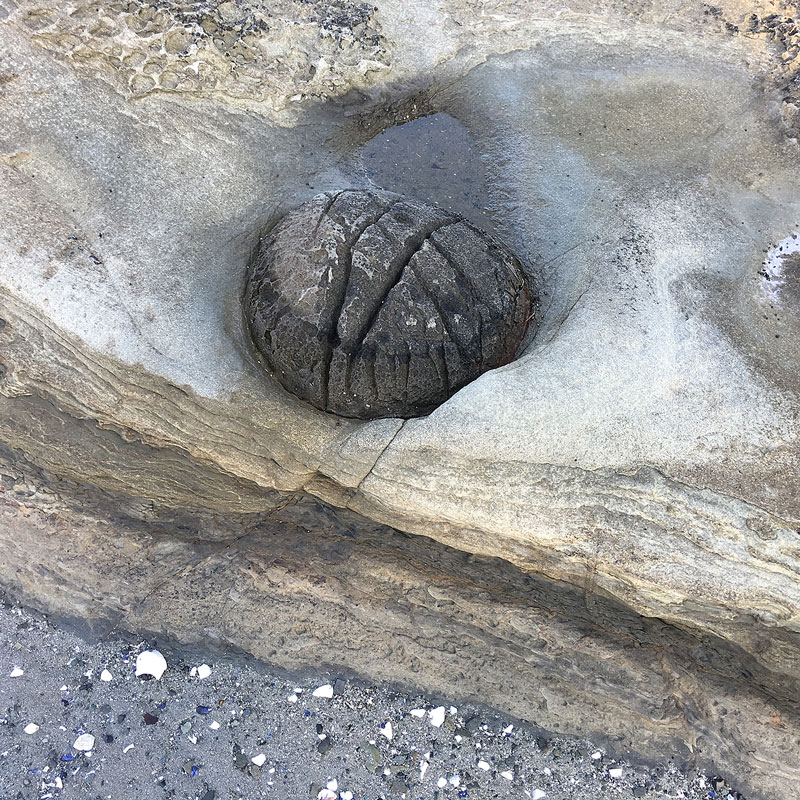