GaLTT is authorized to enter into trail licence agreements with willing landowners. This is a valuable tool in helping GaLTT to achieve a public trail system that connects neighbourhoods and runs from Descanso Bay to Drumbeg or from Silva Bay to Sandwell.

What is a trail licence?

A trail licence is a contract, in which a landowner permits a trail to be constructed on their land for public use with the understanding that the trail will be maintained and insured by GaLTT.

A trail licence usually sets out the type of use permitted on the trail. For example, use of the trail is typically restricted to walkers, cyclists, and horse riders, but this is adapted as needed for each trail licence.

How long does the agreement last?

A trail licence contract usually has a fixed term that can be renewed automatically with the agreement of the landowner and GaLTT. In addition, terms may be negotiated which allow GaLTT or the landowner to terminate the agreement prior to the end of the term in specific circumstances.

What happens if the landowner sells the property?

A trail licence does not exist in perpetuity, nor is it necessarily transferred if the land is sold. In these and many other ways, a trail licence differs from a conservation covenant or easement.

Who maintains the trail in good condition?

Usually, a trail licence provides that the owner bears no responsibility for upkeep of the trail (unless it is their wish to do so). GaLTT is typically responsible for trail maintenance as specified in the contract.

What happens if someone is injured on the trail?

Under a trail licence, the landowner has no liability in regard to injuries or damage sustained by users of the trail. Insurance is held by GaLTT as the licensee. GaLTT regularly reviews the nature and extent of their insurance coverage to ensure all current trail licences are covered adequately for the users and maintainers of the trails.

Who gains from such a licence?

Through the generosity of landowners, all Gabriolans benefit from access to trails, and trail licences help GaLTT to fulfil its goal of providing a comprehensive and integrated network of trails on Gabriola Island. 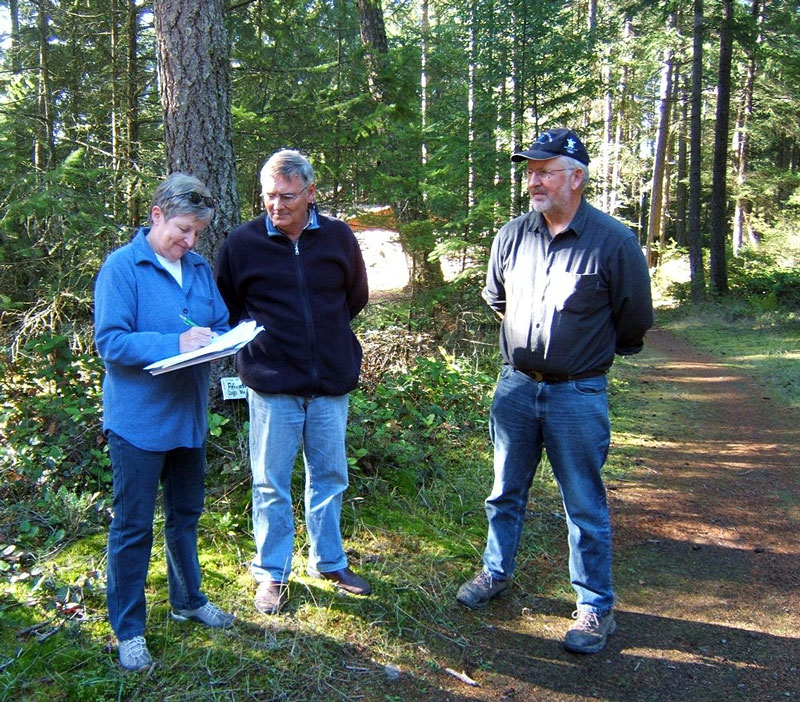 Just after John signed, a cyclist rode by on his way to the park, unaware of the significance of his route. Since then signage has been installed.

This was the first licence of many. At first, we approached landowners to urge their participation, but recently landowners have also initiated such discussions, much to our delight. As of fall 2021, GaLTT has nineteen current agreements with landowners for trails across their land

Contact trails@galtt.ca if you are interested in using this legal, risk-free way to allow the public to use a trail over a restricted part of your property.